Examples of the much rarer non-standard type of inscription are the following. These are from Wadi Mukatteb, and are accompanied in each case by a sketch of a horse and rider. (Euting Nos. 410, 416 = CIS II Nos. 890, 914 = Stone Nos. 2055, 2079, full transcriptions infra at the end of this section.) In one the rider is on the horse. The horse seems to be stumbling and the rider in some distress or otherwise agitated, as he has one hand raised. What may be a spear or lance is depicted falling to the rear. The horse’s equipment appears to be coming loose. In the other the rider is dismounted, and similarly in a stance conveying discomfort, holding onto the reins with one hand. The horse’s equipment in this picture looks as though it is floating almost above the back of the horse. The inscriptions accompanying both pictures are clear. As will be seen in the transcriptions infra, these include the word ‘-b-d. This verb is capable of two interpretations: 1) = “make, compose”, the common Aramaic sense in later times, and 2) = “work, slave, suffer”, the usual Hebrew sense. The received wisdom, in fact, the only possibility considered until now, is that the word means “make”, and the inscriptions inform us that the person whose name appears in both, Saad-Elahi son of Aala (s‘d ’lhy br ’‘l’), “made” i.e. “drew” these pictures. However, this interpretation produces a construction unique in the Sinaitic inscriptions, whereby the person named is credited with an artwork. Pictures, usually of 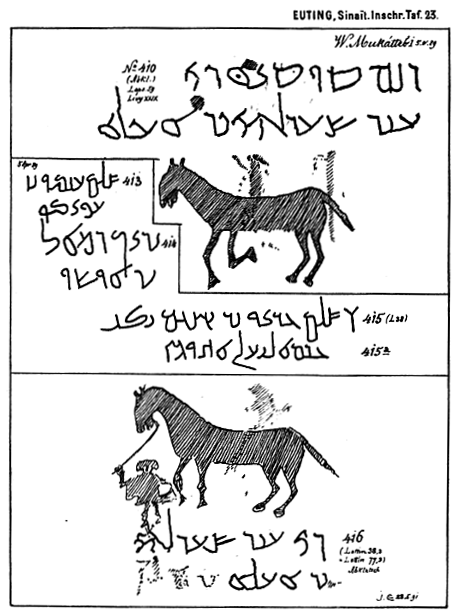 herd animals, very commonly accompany the inscriptions, but there is no case in which a named individual takes credit for the drawing. The writers are not prominent in a personal way. Almost they are self-effacing, and this distinguishes the Sinaitic inscriptions from regular graffiti, particularly those dating from Roman Imperial times. The inscriptions contain regular formulae, and are proper, neither jocular nor personable, nor even conversational. In the few instances where other statements are made, alongside the names, these, too, are sober and factual. The conventional reading so-and-so “made” or “drew” is improbable, therefore, and the alternative meaning of the verb, “work, suffer, etc.”, should be considered. The phrases would then mean: “These are the horses which were the bane of Saad-Elahi son of Aala” (Euting No. 410: dnh swsy’ dy ‘bd s‘d ’lhy br ’‘l’), and “The bane of Saad-Elahi son of Aala …”, lit. “That which (was) the bane of …” (Euting No. 416: dy ‘bd s‘d ’lhy br ’‘l’). The verb would be an Hebraizing passive, Pual or Poal third person sing. masc., and the subject, the personal name: Saad-Elahi “was oppressed/fatigued” by the horse(s), or the horse(s) were “the bane of” Saad-Elahi. The verb includes the notion of “slavery”, and is translated infra, therefore, as “the slave’s bane”. The event described is one in which riders and horses harassed the writer as they would a slave, and Cosmas’ understanding of the inscriptions as memorials of the Exodus, identifies that event as the chasing of the freed Hebrew slaves by the Egyptian riders and horses in the Red Sea. The oppression spoken of is past tense because, as Miriam the prophetess put it (Exodus 15. 21): “The horse and his rider hath He thrown into the sea.” Note the headgear and clothing of the riders suit the common ancient Egyptian military style, with the head-dress made of loose material to the shoulder, and a short cape, unlike the usual military equipment of Roman Imperial times, such as “Nabataean” horsemen might be expected to wear, including a metal helmet or a turban.

The Horse and Rider Inscriptions

These are the horses which

were the slave’s bane of Saad-Elahi son of Aala.

The slave’s bane of Saad-Elahi