From Convent to Pentecost

I hardly became acquainted with my family when again they severed all connections. The fact that I had left the âChurchâ and had embraced the full salvation in another Church embittered them. Less than one month after my conversion I received a telegram that stated, âYour father died. Funeral at 9:00 A.M. Thursday.â

I sent a beautiful wreath of flowers but refrained from attending my fatherâs funeral. I feared there might be trickery in the wind or that a snare laid wait for me if I returned home.

Sure enough, had I gone, there was a trap designed for my recapture to be sent back to the Convent. I shall explain this later in this chapter.

A few days after I received the telegram telling of my fatherâs death, I received a phone call. The clerk at the desk of the Hotel where I was staying announced the arrival of my brother, the priest, and two younger sisters. Would I please come down to the lobby to meet them.

Just one glance told me they came for trouble. We hardly exchanged greetings when Chet scowled and remarked, âYou sent your father and your mother to early graves by leaving the Church.â All three spoke bitterly and resentfully of my joining the Pentecostal faith.

After I felt they had said just about enough, I stepped over to Chet and took hold of his coat lapel. I looked into his face and said, âChet, why donât you come clean and let your sisters know just what the priesthood is really like? How many girls have you deceived and robbed of their virtue?â

The words were scarcely out of my mouth when my brother struck me a severe blow sending me reeling to the floor. The clerk at the desk came to my rescue and helped me to my feet. Turning to my brother standing there in his holy Habit, so haughty and angry, the clerk said, âReverend, this is the first time Iâve ever seen a minister strike a woman.â

My brother and my sisters were not ashamed, but they merely turned on their heels and walked away.

My youngest sister was chosen as administratrix of the will and the family estate. While I was in Wisconsin in a Revival Meeting with Reverend Michaels, I was notified that my family was suing me for twelve thousand dollars that my mother had given me before her death. Mother had asked me to buy a car and a fur coat and to invest the remainder for my future. Mom realized that my brothers and sisters were married and had security. The better part of my life had been spent in the Convent and I returned to face the unknown world as a pauper, a sick woman with a broken heart. When signing the papers before the old banker, she said, âI want you to dress like your sisters.â

They falsely proved in court that I had influenced my mother to sign papers when she was incapable because of her illness. Since mother and the banker had both died, I had no witness to verify or validate my claim. I therefore lost everything including the money, fur coat, car, and even my trunk of clothes containing my personal belongings. My sisters came secretly and took them from my apartment while I was away. 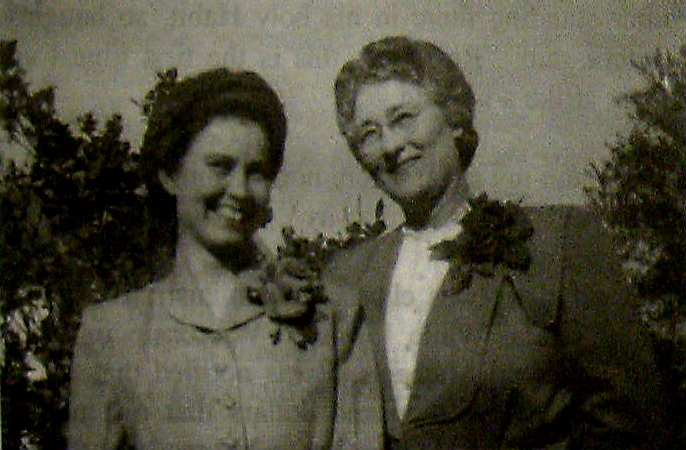 Sister Nilah and Sis. Charlotte in their early days together

After my conversion, the young evangelist, Sis. Nilah, asked me to travel on the evangelistic field with her. First I journeyed with her to Chicago, then to her home in Illinois. From there we went on to her next Revival in another town in Illinois. I traveled as a visitor and a friend paying my own expenses.

In the month of August I spoke publicly for the first time. It was in a small town of Ohio that I gave my first Testimony of Convent Life. Sis. Nilah and I have traveled together fourteen years from State to State and Province to Province giving the Testimony and preaching the old-fashioned Gospel.

Many repercussions were brought on as I spoke and broadcasted the truth of Convent Life across the country. Mean and threatening letters began pouring in from my family as well as the priests. I was told to quit giving the Testimony or I would have to take the consequences. Finally I didnât even open the letters, but just put them away. I thought, âWhy keep weeping?â

Almost two years had elapsed when one day the postman handed me a letter. I told Sis. Nilah that it was from my youngest sister, Babe. I told her I felt led to open it. The letter read, âPlease, forgive me for all I have said and done. Iâm very sick. If youâll only come home, I believe Iâll become better.â

Christmas, the day I was to meet my family, that is my sisterâs family, arrived with holly, tinsel and joyous faces. The nearer I got to Babeâs home, the harder my heart was beating. My brother-in-law and niece ran out of the house to greet me the moment I drove into the yard. They threw their arms about me, and crying, asked for my forgiveness. After they had told me of Babeâs illness and how she had returned from the Mayo Clinic in Rochester, Minnesota, to die, they took me in to see her. Carl, her husband had been informed that her illness was no longer ulcers, but cancer of the stomach.

I fell on my knees beside Babe as she looked through tears and asked forgiveness. âBabe,â I announced, âI have good news for you. The Lord can heal as well as save your soul.â

Reverend William Branham came to Vandalia, Illinois, and was holding a healing campaign in a huge tent. I made a bed in the back-seat of our car so that I could take Babe. We also took a young blonde girl, who was a deaf mute, and her mother along to the meeting.

The crowd was huge. The sick and diseased came from near and afar to have this man of God pray for them. We waited four days before Babe and the deaf mute could be prayed for. When Brother Branham looked at Betty, he had great compassion. He prayed earnestly. Then in a low voice he said, âBetty, say âHallelujah.ââ

Her eyes sparkled and she spoke fluently. Of course she had no vocabulary, so she merely repeated what she heard. The crowd cried, clapped their hands and in unison praised God for this great miracle.

When Babe beheld the miracle of Bettyâs healing, excitement mingled with faith and began to fill her heart. The preacher merely touched Babe and said, âThe Lord bless you.â She walked to the back of the tent, fell to her knees and cried, âIâm healed! Iâm healed!â

Words failed when I tried to express my thankfulness to God. However, with tears flooding my face, I lifted my eyes heavenward and praised Him for His goodness to us.

Following that nightâs service we went to the restaurant. Babe had not been able to eat anything solid for several weeks. She looked at me in surprise and bewilderment when I asked the waitress to bring her the largest T-bone steak they had. I turned to her and said that she could eat every bite of it in Jesusâ Name. Just about that time little Betty shouted âHallelujah! Thank-you, Jesus!â â the very words that she had heard at the tent.

In a matter of seconds our table was surrounded by friends and curiosity seekers. Seated at this table were the evidences of two mighty miracles that stirred all Vandalia.

My sister, Babe, and I kept in close contact with one another. Friendship turned into close fellowship. And fellowship turned into devoted love and sisterly understanding. Several months had passed when I received a card from Babe saying my father had gone to her home for a visit and wanted to see me.

I couldnât understand this. Had not Dad died? I had even sent a wreath to his funeral. However, I drove to my sisterâs home where my Dad met me at the door. Although he never asked forgiveness for the past, he did place his arm across my shoulder and told me it was good to see me.

Why had I received a telegram telling me Dad had died? It was finally revealed that a clever trap had been set to take me back to the Convent had I gone to Dadâs funeral. Thank God that His wisdom was imparted to my heart when I decided not to attend. Dad seemed changed and was truly glad to see me. Now I knew that God was answering prayer for my family.

The following year, Sis. Nilah and I journeyed to California and visited Dad. He gave me Chetâs address, the brother who struck me in the hotel lobby while in his priestly habit. While I was in Los Angeles, I phoned Chet, having no idea how I would be received or what to expect. He seemed elated that I had called and asked me to come to his home that day.

Following his directions, I drove straight to his home. I received the shock of my life when Chet met me at the car dressed in civilian clothes, and introduced the lady standing beside him as his wife. At the very first opportunity I had to be alone with him I eagerly questioned him as to how, why and when he had left the priesthood and married.

He looked at me and cried. âCharlotte, your face has haunted me since I struck you that day.â And he continued, âI married my housekeeper as I felt it was the most honourable thing I could do.â

Because of much prayer and because I refused to retaliate and because I had returned good for evil, my family saw that Christ was real in my life. One by one they left the âChurchâ and started to attend various Evangelical Churches. However, at this writing, none of me brothers and sisters have experienced the Born-Again experience. But just to have left the âChurchâ and its idolatry to attend an Evangelical Church was a big step in the right direction.

Dad died while we were speaking at the New Brunswick, Canada, campmeeting in 1953. I wish I knew if that he was saved. but I must leave him in the hands of a merciful Saviour. He did fall on his knees and repeat a sinnerâs prayer before we bade him farewell the last time and journeyed eastward. Joshua in the Old Testament stated, âAs for me and my house, we shall serve the Lord.â